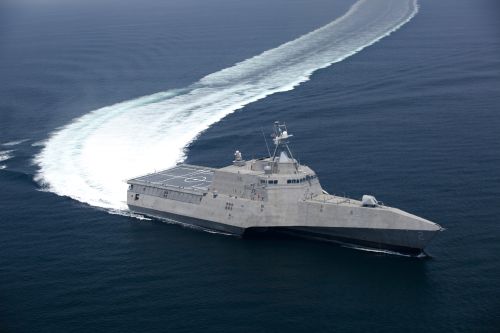 Australian Racelogic dealer Applied Measurement recently supplied a Vbox SL3 marine version to Austal, a Western Australian ship builder and designer. The application was to measure all vessel motions, Pitch, Roll and Yaw (alternatively known as Trim, Heel and Leeway) to further the development of the onboard stabilisation systems and for future hull design.

The recent tests took place off the Gulf of Mexico on the Austal designed and built Littoral Combat Ship LSC 2 “Independence”. The LCS is a major part of the US Navy’s plan to address asymmetric threats of the 21st century.  Intended to operate in coastal areas, the ships will be fast, highly maneuverable and geared to supporting mine detection/elimination, anti-submarine warfare and anti-surface warfare, particularly against small surface craft.

Austal factored their purchase of the VboxSL3-M version for their unique application, on easy installation, wireless real-time monitoring/logging and overall accuracy of the three GPS engine SL3 unit. But the main factor was the sheer size of the Vbox SL3-M which allows for easy travel around the world for storage. The demonstration and training of the unit was performed by Craig Nyssen of Applied Measurement Australia, which Austal said proved to be very informative and usefull, which gave them a head start for their tight schedule. After testing Toby from Austal commented on the unit saying “Overall the VboxSL3 is a great unit that offers a number of significant leading edge features and should prove to be very useful to Austal in the future”.