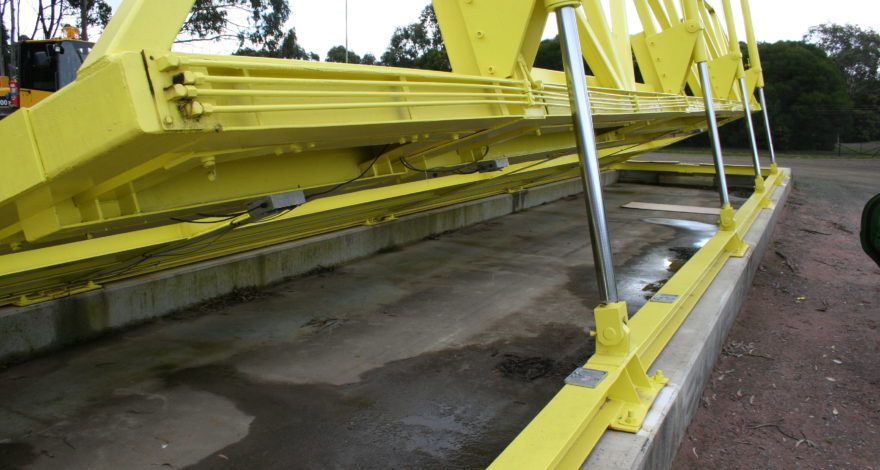 Applied Measurement Australia Pty Ltd were approached by a vehicle testing ground AARC (Australian Austomotive Research Centre) to help renovate and update a Tilt Table. The Tilt Table at AARC was designed for the vehicle stability and/or load restraint mechanism testing tilting to an angle of 45 degrees.

In practice, for a vehicle tip test, the vehicle is driven onto the table and the wheels positioned on the pads. Once the vehicle is secured in place, the hydraulic jacks extend to tilt the bridge. During this process, the load on the weigh pads are monitored until the weight on the pad is near zero. At this point the vehicle is near tipping over and the platform angle is recorded.

The tilt bridge was mechanically functional however the measurement system was outdated and some load cells required replacing and recalibrating.

The tilt bridge was a hinged platform with four hydraulic jacks capable of lifting around 70 tones to a tilt angle of 45 Deg. The surface of the bridge has three independent weighing pads located along the same side of the hydraulic jacks. Each of the three weigh pads had four load cells, with one load cell in each corner connected to a summing box.

The Load cells were serviced repaired and replaced as necessary. The output from each of the  pads Applied Measurment summing boxes designed and manufactured in house provided a 0-10V output which was connected to a Mantracourt T24-ACMi-VA Voltage acquisition wireless transmitter module. The three T24-ACMi-VA were mounted to the left hand side of the tilt table. The pads were loaded with known weights and the T24-ACMi-VA calibrated to give an output in Kg.

In addition to the three wireless load measurements we also integrated 6 Accustar inclinometers onto 6 aluminum bars with magnetic feet for extra measurement points adding scope and flexibility to AARC’s tilt table. This allows the customer to measure and compare 6 seperate tilt angles located either on the vehicle or on selected points on the tilt table. Each inclinometer was integrated with a T24-ACMi-VA which provides 5 volts to the Accustars. The Accustars return a signal voltage proportional to the angle of the beam, and each beam was calibrated using a laboratory tilt table over a 45° range. .

A laptop computer was equipped with a T24-BSue and the T24LOG24 software installed. The inputs from the three weigh pads and 6 inclinometers were configured in to a work space so that they could be viewed and logged during testing.

By mounting the inclinometers on both the tilt bridge and the vehicle under test the angular difference between the two could be measured. This allowed the user to see the effect of the suspension on different parts of the vehicle.

All data during the test was logged at every second to allow the analysis and compilation of a report for the end customer.

For any further information about the AARC Tilt table or if we can help you with a wireless loadcell solution, please contact us