During their latest SUV launch, the E-Pace, Jaguar broke the world record for a mid-air barrel roll in James Bond style. Jaguar measured and recorded the jump and its successful landing using in the Vehico steering, throttle and brake robot whilst being fed speed and position from the VBOX 3i RTK, IMU04, and RTK base station. The event took place with a combination of manned and robot-controlled jumps carried out at the Santa Pod Raceway, an hour away from the Racelogic UK office.

The Vehico provides objective vehicle testing, precise and reproducible tests and driveless testing using GPS using Vehico robots. The vehico robots are designed for “easy operation, quick installation and a tremendous flexibility” so that all different types of vehicle testing can be performed including: 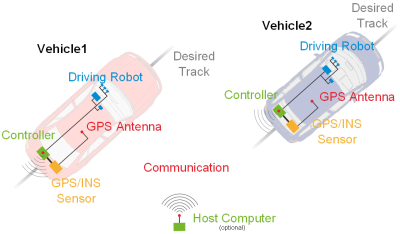 CO.ACT as the easiest product level allows the actuation of the vehicle’s pedals, steering wheel or gearshift lever by quickly installed robots.

CO.REMOTE combines a driving robot with a remote control. By remotely controlling the steering angle and the pedal movements from outside the vehicle, unmanned vehicle testing can be realised in a very simple manner.

With CO.TRACK the vehicle is steered automatically. The VEHICO track control algorithm guarantees that the test vehicle drives highly accurate and reproducible on a pre-defined course. 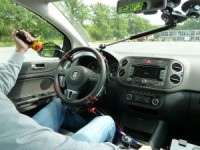 CO.DRIVE is an extension of the functions of CO.TRACK where the test vehicle drives completely autonomously. Besides controlling the track CO.DRIVE additionally controls freely definable speed and acceleration profiles. A human driver is no longer required because the vehicle is completely driven by CO.DRIVE. Nevertheless the driver can operate the test car in the usual way if CO.DRIVE is disabled.

Two or more autonomous vehicles can be synchronized with CO.SYNC. A special synchronization module receives the data of each vehicle involved in the test. The driving states are optimized in that way that the previously defined distances between the vehicles or absolute positions at certain times are followed precisely. Such test constellations are necessary for designing future generations of driver assistance systems like adaptive cruise control or turning assistance systems.

The VBOX 3i RTK, IMU04 and RTK base station were used to provide the speed and position to the Vehico driving robot.  As such, position accuracy was within +/- 2 cm so that highly consistent and accurate teat runs were performed and logged.

The VBOX 3i RTK is a top of the range data logger that combines the twin antenna GPS system with the GLONASS satellite tracking to produce results that are within +/- 2 cm accurate at 100kHz. 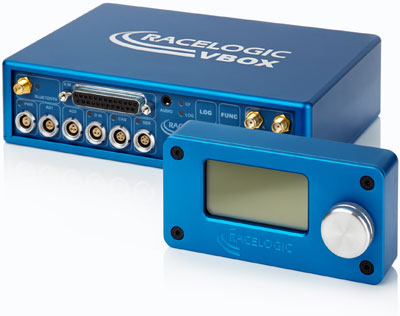 This logger is used consistently to measure vehicle separation, time to collision, position within a lane, and more to 2cm precision. The two GPS/ GLONASS antennas enable the VBOX 3i RTK to measure all the normal VBOX GPS parameters, plus the azimuth and elevation between the antennas, i.e. the direction the antennas are pointing, and the angle between them measured from the horizontal. As such, the slip and pitch angle are measured. 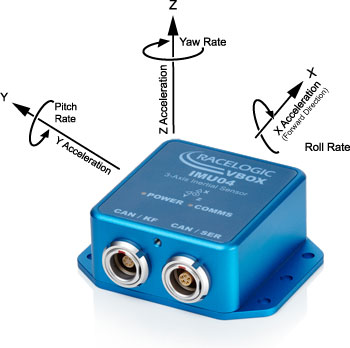 The CAN version is temperature compensated with improved calibration and stability. The IMU04 can be used stand alone or in conjunction with simple connection and configuration via the CAN bus interface, or for use with VBOX GPS data logger.

The IMU is constructed with a splash proof casing, which is rated to a limited ingress IP rating of IP67*, making it ideal for use on boats or in harsh environments, as well as automotive testing.

Using synchronous 16bit sampling for each of the internal sensors provides a high degree of accuracy, with yaw rate resolution typically 0.014 degrees per second and acceleration resolution down to 0.15 mg.

The DGNSS Base Station is designed to improve positional accuracy of VBOX units and other compatible GPS/ GLONASS systems by calculating and transmitting differential correction data. By programming the Base Station with a known position, it is able to accurately monitor the difference between its programmed position and the position that it is receiving via GPS/GLONASS. The difference is then transmitted via radio to allow a remote GPS system to correct its position. The differential correction message can be broadcasted in RTCM, CMR or proprietary RTK formats using an internal or mast mounted radio modem transmitter.

Depending on the type of Base Station and roving unit used, position accuracies of up to 2cm 95% CEP are available.

A summary of each unit is presented below: